What is Anorexia and What You Should do About It?

Mental disorders are a common condition in the United States. It’s estimated that around one-in-five Americans will experience a disorder annually. However, most of these disorders are pretty mild. But some can completely debilitate people from living their lives. One particular disorder that can do that is anorexia.

Anorexia is a severe mental disorder affecting about 9% of the population of around 28 million people. It’s growing even more as people start developing unrealistic body images from the media. Here’s what you need to know about anorexia.

Anorexia or anorexia nervosa is an eating disorder that causes people to obsess about their weight and food. People with anorexia will often restrict the amount of food they eat or even avoid eating altogether. It can lead to extreme weight loss, which can be very dangerous.

Anorexia is different from just trying to lose weight. With anorexia, people have are in great fear of being overweight. As a result, they see themselves as overweight even when they are dangerously thin. This distorted view of their body leads them to continue starving themselves even when it’s harming their health.

There are many different symptoms of anorexia. Some of the more common ones include:

A unique symptom of anorexia, and one way to know that someone has it, is a behavior known as purging. Purging is when people make themselves vomit or use laxatives to lose weight. It’s a dangerous behavior that can lead to serious health problems. 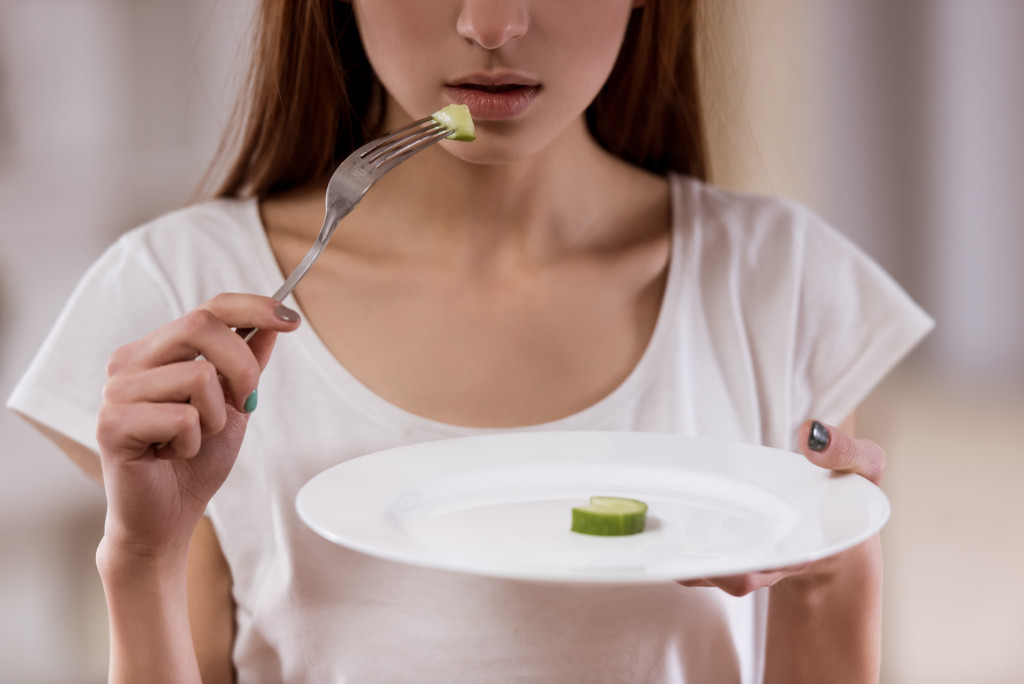 The cause of anorexia is unknown, but certain risk factors seem to increase the chance of developing the disorder. One of the most common causes of anorexia is the unrealistic views of oneself.

The world is filled with images of perfect bodies. People see them in the media, on TV, and in movies. As a result, it’s easy to develop an unrealistic view of how we should look. And when people don’t look like that, they can feel bad about themselves. When combined with the next cause, it can lead to severe anorexia.

Anxiety and unrealistic views come hand in hand in people with anorexia. When people are anxious, they often turn to food as a way to cope. But the anxiety can also lead them to avoid food altogether. This avoidance can then lead to anorexia.

Depression is another common mental disorder that can lead to anorexia. People with depression often don’t have the energy or motivation to eat. They may also see food as a way to comfort themselves, leading them to overeat and gain weight.

There are many complications known to be related to anorexia. The first of which is dental issues.

Since people with anorexia tend to purge, the vomit acid can start eating away at their teeth. This can lead to severe tooth decay and even loss of teeth.

The second complication is digestive problems.

People with anorexia often have trouble digesting food properly. It can lead to several problems, such as abdominal pain, constipation, and diarrhea.

Anorexia can often be a complicated disorder to handle. It takes a lot of time and effort from the person who has it and those around them. One way to deal with this is by helping them with the disorder.

One of the most common ways to treat anorexia is through therapy. People can do it in several ways, but the goal is to help the person understand their disorder and learn how to cope.

Cognitive-behavioral therapy (CBT) is one type of therapy that’s often used to treat anorexia. After therapy, it’s good to help them handle their appearance.

Appearance is the main problem with people with anorexia. So the first thing to handle is their weight. Through proper diet, exercise, and control over purging, a person with anorexia can reach the physical appearance they want.

The next thing that needs to be handled is their dental issues. If they have lost a few teeth because of purging, they’re going to need some tooth implants. If they have busy lives, they can get all-on-four tooth implants. This kind of implant puts a set of teeth instead of just one. It can drastically reduce the time needed for the operation while also being cheap. It’s also good for anorexic people who are anxious about going to the dentist. By dealing with their dental problems due to anorexia, they can feel better about themselves.

Lastly, it’s important to provide social support. This can be done in several ways, but the goal is to help the person feel better about themselves. One way to do this is by assisting them in finding a hobby or activity they enjoy. Doing things together as a family can also help.

Anorexia is a severe mental disorder that should not be taken lightly. However, it’s a highly treatable disorder. Following the steps above, you can help your loved ones get the treatment they need and start living healthy lives.